HISTORY BEGINS IN THE LATE 1800s 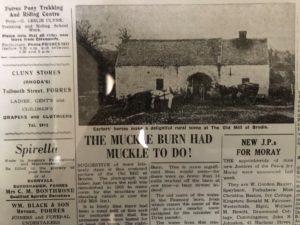 The Mill was built

The photo was taken just before the original Victorian Corn Mill was demolished in 1905 to make room for the structure now standing. 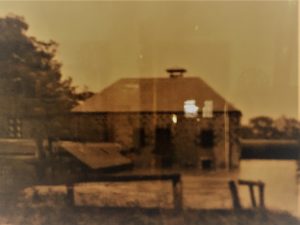 Converted to an Inn

The meal mill was closed and the building was converted to what is now known as the Old Mill Inn. 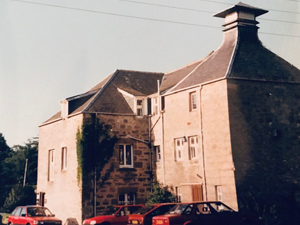 The Old Mill Inn develops a reputation for fine food. 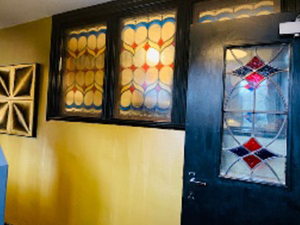 Character and charm enhanced to create a contemporary restaurant with rooms.

WHO MAKE THE MILL 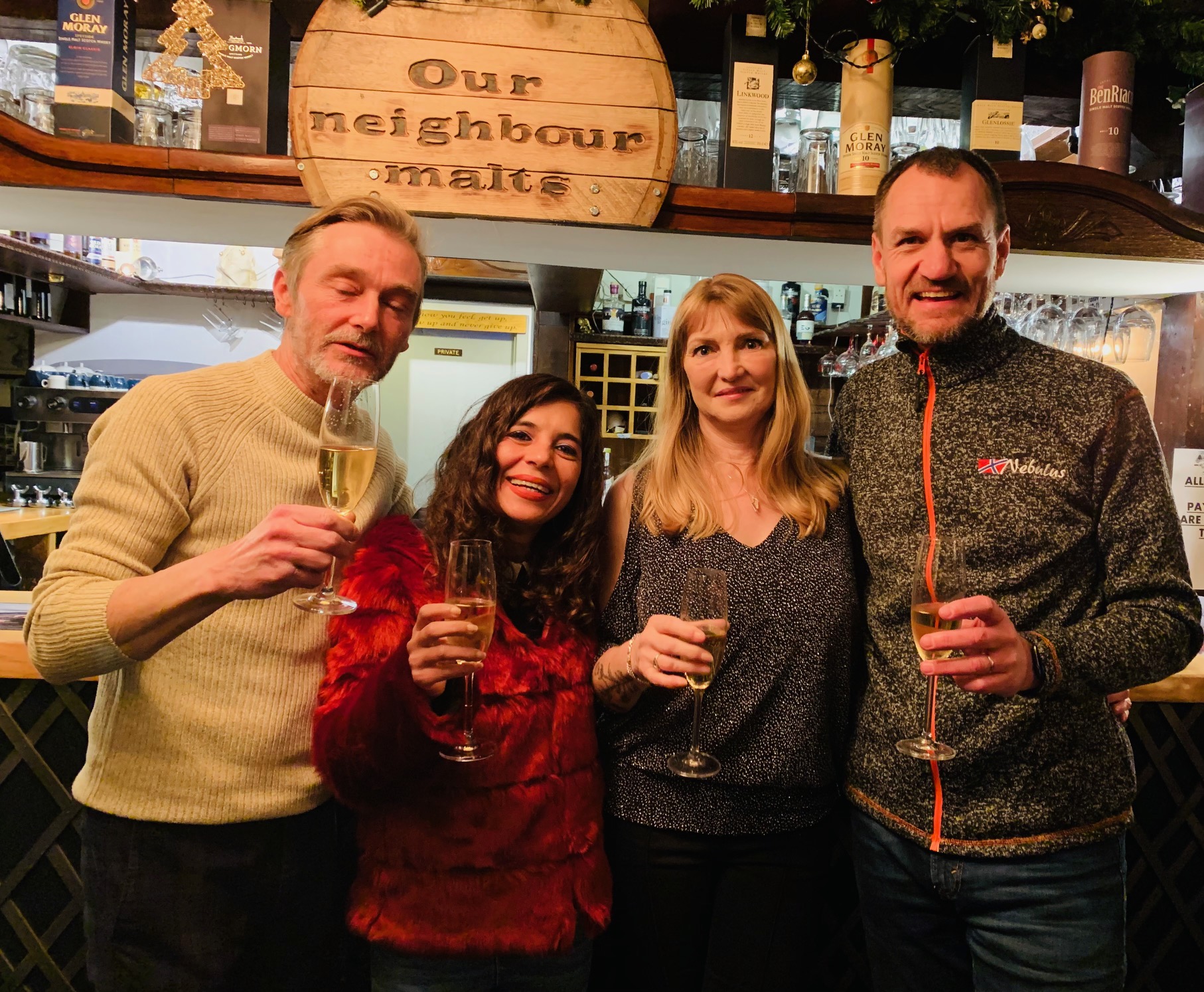 The Old Mill Inn is a family owned and run business which carefully balances high quality standards with a personal touch. 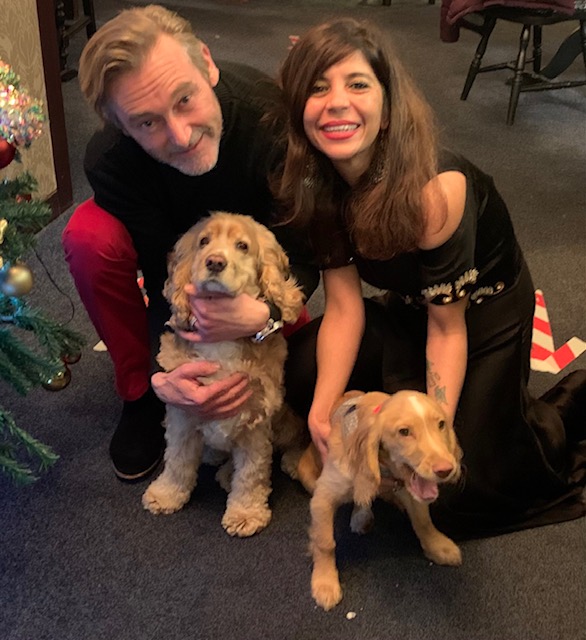 After more than 2 decades of owning hospitality businesses and running large-scale events around the world – from Dubai to Delhi to Singapore and South Africa – Sophie & David decided to come home to pursue their dream of owning a charming country inn in the Highlands of Scotland. They are both very involved in the day-to-day running of the business as very hands-on Innkeepers!

When Sophie can get some time off from the Mill, she enjoys going for walks on the many magical beaches across the Moray Firth coast with Iona & Tiree their Cocker Spaniels. Sophie also enjoys travelling and seeing the most spectacular and remote parts of Scotland. She has a passion for food and works very closely with the Head Chef reinventing menus to add that unique twist to our food. Sophie along with Head Chef Paul have taken classic Indian recipes handed-down from generations and added a Scottish twist to them resulting in the hugely successful “Tartan Thali” nights at the Mill. She has also led the many upgrade and refurbishment works to the Mill ensuring a sympathetic balance between the charming traditional character and contemporary comforts.

Growing up in the shadow of the “Big Red T”, that stretches across Dennistoun, David left Glasgow to spend the past 25 years running international hospitality businesses across Asia, Africa and the Middle East. David regularly travels the length and breadth of Scotland experiencing all that is magical about our country’s inns, from Portpatrick in the south west to Unst in the far north of Shetland, and is always looking for new inspirations to improve the Mill. David is also a passionate Whisky collector and his focus for the Mill Malt collection is to house the best representatives from our most local distilleries – including brilliant drams from Miltonduff, Royal Brackla and Glenburgie. In spite of all his travels over the past 2 decades, David still maintains his season ticket for Copland Front – although it’s mainly used by son Kyle these days! 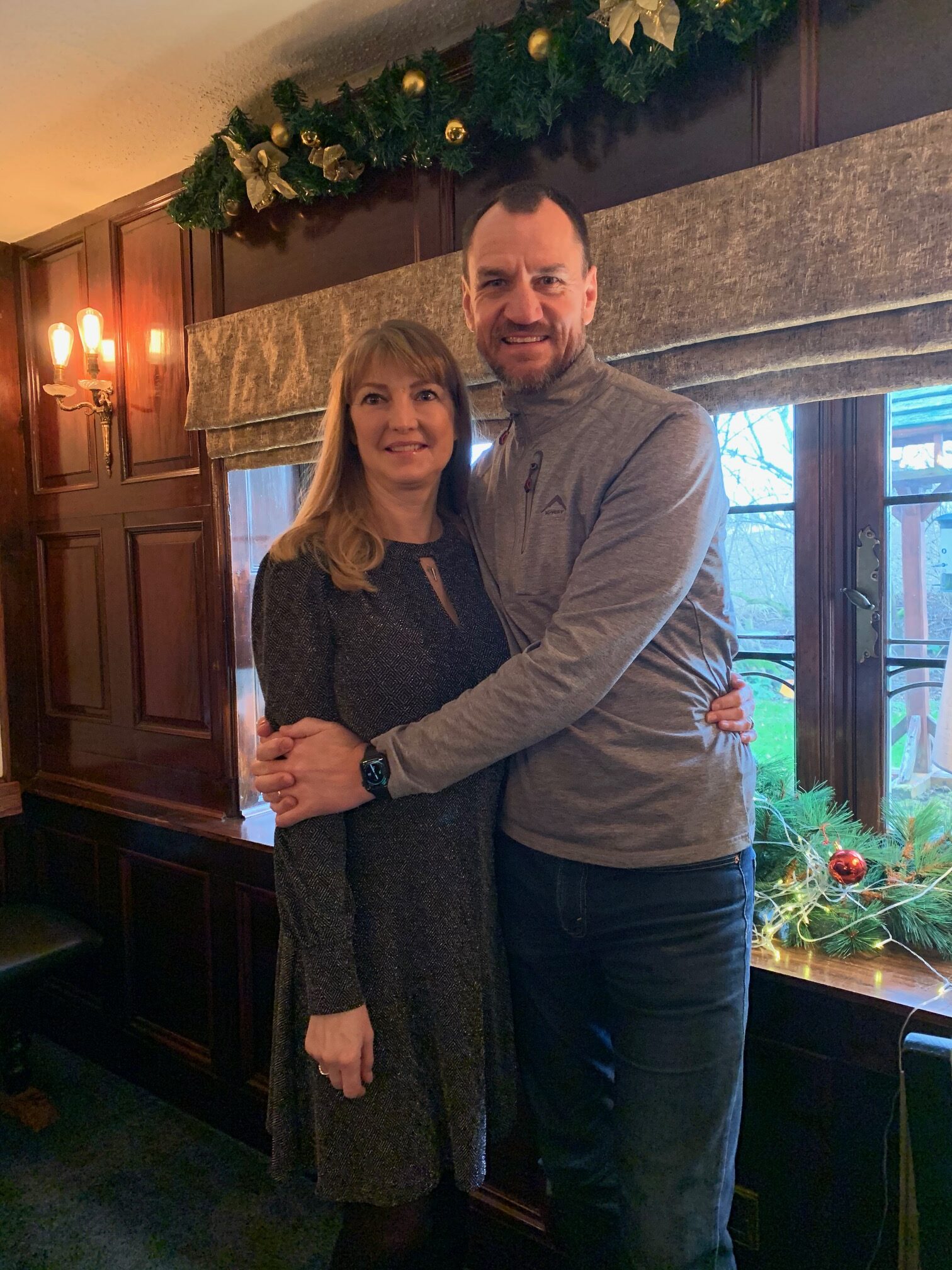 Colin and Karen are currently living in South Africa, with Colin working for a major Africa bank based out of South Africa. It has been a dream of theirs to own an Inn in Scotland with Karen’s brother David and sister-in-law Sophie. Colin and Karen love to spend as much time as possible travelling Scotland, sampling the food and tasting the many whiskies. They have played a major role in the revamping of the Mill and have been very hands on with the improvement projects in the restaurant and the rooms.

They especially love spending time at the Old Mill, enjoying the beautiful beaches and countryside around area. 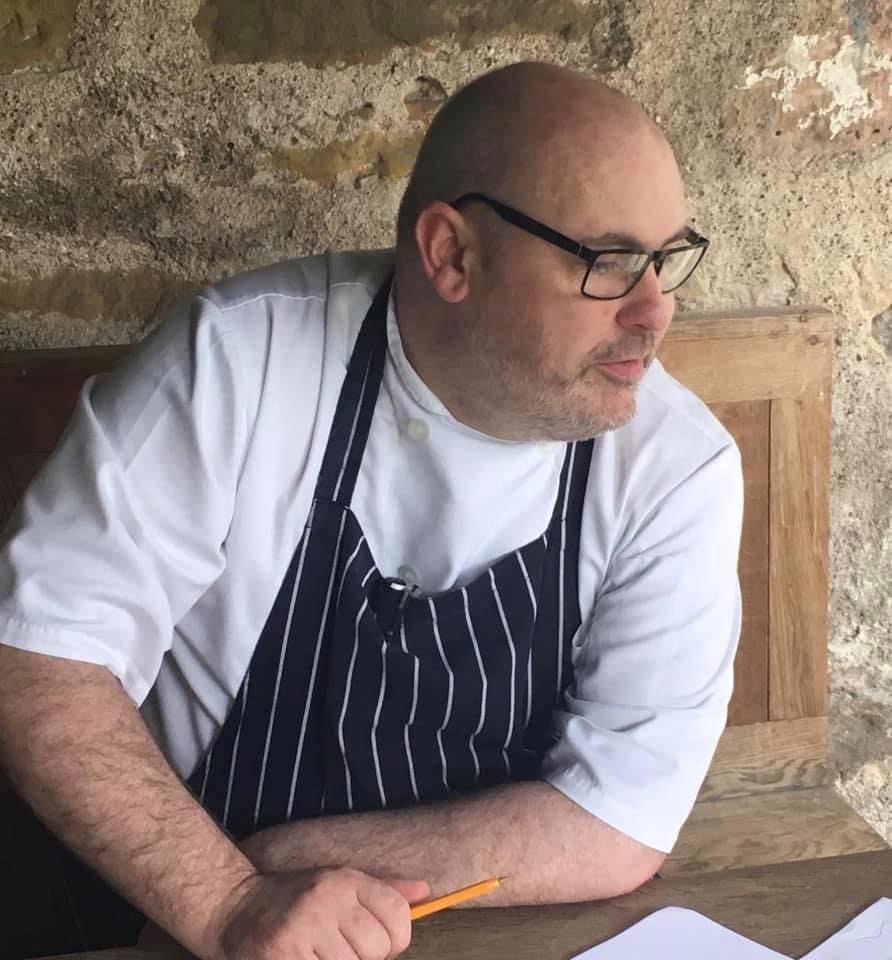 The Old Mill Inn’s Kitchen Brigade is led by our talented head chef Paul McKechnie. Paul has 20 years of culinary experience in kitchens all over Scotland. He is very passionate about locally sourced ingredients and changes his menus according to the season to ensure only the freshest of produce. Paul takes traditional dishes and put his own creative spin on them which results in the contemporary Scottish cuisine reflected in our menus. Our Head Chef also ages and hand-cuts all our steaks and his signature dish on our menu is the Organic Roe Deer, which is cut by our Head Chef and prepared to perfection.

Paul is also an avid snooker player and is still trying to win his first tournament! He loves to cycle in the Scottish countryside and is a big Caley Thistle fan. 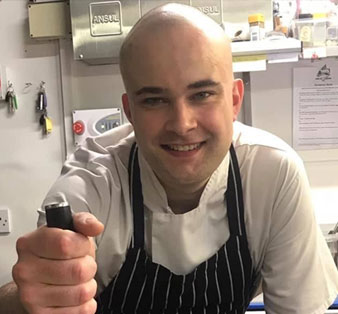 Tom is the longest serving member of the Old Mill Inn team. Starting as a Kitchen Porter, Tom learnt what is takes to produce fine food and tirelessly worked his way up with grit and determination and is now our Senior Sous Chef in the Kitchen. Tom is known to specialize on the Chargrill and cooks our hand-cut and beautifully aged steaks to perfection. He also makes a mean curry, taking traditional Indian recipes and adding a Scottish twist to them.

Tom is a huge shark fanatic and wants to cage dive in Australia one day! In his spare time he likes to watch movies, listen to music and tries to never miss a single Manchester United game with a cold pint of lager! 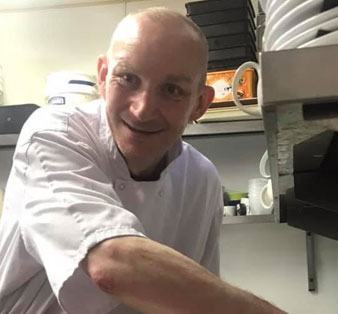 Andrew is our pastry Chef and is responsible for all the desserts at the Old Mill Inn. We believe everything needs to be made from scratch, whether it is homemade bread, baked cheesecake, parfait, eclair or our ever popular Sticky Toffee Pudding – Andrew gets it all together!

Andrew on his days off loves taking his dogs for long walks, enjoys a fine glass of wine and is very passionate about motorbikes. 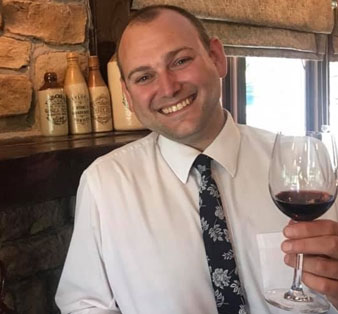 James has 16 years of hospitality experience and is responsible for the entire front of house operations at the Inn – from ensuring that all our restaurant guests, hotel residents are all given that special touch and ensuring our high standards are consistently met. James is also very experienced with all aspects of our cellar, which hosts a wide variety of Real Ales from our local breweries.

James is a very keen fisherman and most times his line-caught mackerel makes it on to the Old Mill Specials Board! He is also in the process of building the Old Mill’s Walled Garden of herbs and vegetable treats. James also loves cycling and video games. 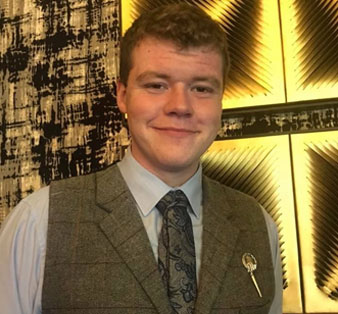 Chris is responsible for our restaurant operations, ensuring service levels and ambience create a special experience for our guests. Chris passionately explains our extensive collection of Scottish Gins to our guests, complemented with homemade garnishes which he prepares himself.

On his days off Chris is a serving member of the 7 Scots Army Reserves. His interests include fine food and a wardrobe to match! 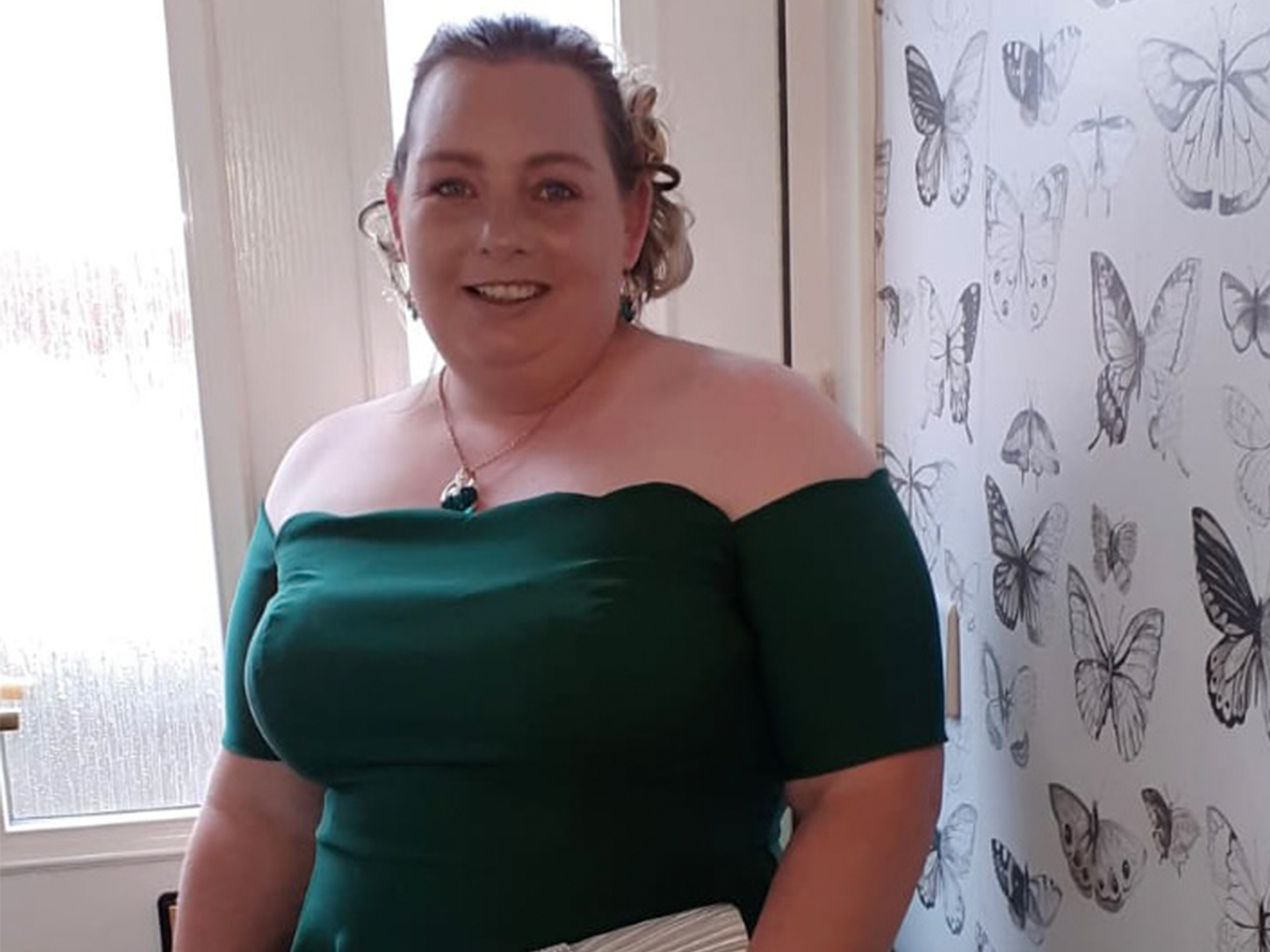 Kerry has been housekeeping for 5 years now and has a very keen eye to ensure all our guest bedrooms are up to the highest standards of cleanliness and comfort!

Kerry loves spending time with her kids and on a rare day off can be found surfing in the Moray Firth.